This Past Week in the Political Bible: Giles Fraser, Jeremy Corbyn, Class War, and Pentecostalism

This past week a number of examples of the Radical Bible (i.e. the Bible roughly equated with, or having some a presence in, socialist or revolutionary ideas) have cropped up. Several people have noticed the recent article by Giles Fraser: ‘Corbyn is an atheist – but his ideas are true to the Bible‘, Guardian (29 September, 2016). Needless to say, this contains plenty of good material for those of us interested in the history of the construction of the Bible and religion in English political discourse, in this instance on the Left.

A couple of qualifications about Corbyn, politicians and Christianity are worth mentioning. First, Fraser claims that it ‘remains gobsmacking that, of all people, it’s the Tories that are still most likely to profess their commitment to the church. For heaven’s sake, Theresa May is a vicar’s daughter.’ The first part of that quotation is probably a bit too strong, though there seems to be evidence of more wariness about pushing God issues among Labour advisors and from Gordon Brown. Conservatives don’t always claim entirely unequivocal commitments. While David Cameron certainly used the Bible, made claims about Britain being a Christian country, and went to church as Prime Minister, he also famously (among those who are interested in these things) claimed that his ‘religious faith is a bit like the reception for Magic FM in the Chilterns: it sort of comes and goes’. However, this may not be so problematic as this is close to Cameron’s view of the established church (‘that sums up a lot of people in the Church of England’, he added). Labour politicians who make claims about their Christianity are not difficult to find, including their leaders. Ed Miliband may have professed a soft atheism but Gordon Brown spoke about his upbringing in the Church of Scotland and would speak about religion and the financial crisis at St Paul’s Cathedral and (post-PM) about ‘Faith in Politics?’ at Lambeth Palace, hosted by the Archbishop of Canterbury. Tony Blair also identified/ies as Christian—he would also have loved to have pushed this a lot more during his time in office—and was parodied by Private Eye as the Vicar of St Albion. Commitment to ‘the church’, broadly understood, is hardly alien to Labour.

Second, this leads to the point about Corbyn who attended a church service organised by Christians on the Left at the 2015 Labour Party conference (just after he had been elected leader), supported their campaign for changes to Sunday trading laws, and, in an interview with Andrew Marr on the eve of the 2015 Labour Party conference, interjected: ‘I am very familiar with the Bible. I was brought up with the Bible’. Yet similar to his Guardian headline, Fraser writes about Corbyn’s ‘atheism’. This may, at times, be true but Corbyn’s claims are a little hazier. When asked if he was an atheist in a Huffington Post interview, Corbyn responded: ‘There are so many things about me written that are unfair, unjust and ill-searched that it would be wrong. I’m not going any further than that, belief is a private thing.’ He also claimed that ‘I respect all faiths, I probably spend more time going to religious services than most people, of all types. I go to synagogues, I go to mosques, I go to temples, I go to churches, and I have many humanistic friends and I have many atheist friends. I respect them all.’ In this respect, i.e. giving various traditions their due, Corbyn is saying standard things for mainstream English political discourse, whether Labour, Tory, or miscellaneous.

Pedantry aside (though it’s not as if Fraser is exactly wrong), Fraser makes one of the most explicit connections between Corbyn and the Radical Bible tradition. Using Amos, a psalm, 1 Timothy, and the Parable of the Rich Man and Lazarus, which is about ‘burning in hell and a poor man, who lived homeless at his gate, being carried off to heaven by the angels’, Fraser claims that the Bible is ‘far more hostile to the concentration of wealth in the hands of a few’ than anything said by Corbyn or Momentum in recent months. And yet, Fraser argues, middle England can ‘sit through these readings without storming out’ and apparently find Corbyn unelectable. Indeed, he notes, the Occupy protest at St Paul’s Cathedral showed ‘the deaf ear that the church and its members often turn when it comes to any reference to their wallets’ (Fraser, recall, was very much involved in the controversies). Even the 90th anniversary of the BBC broadcasting choral evensong, had the choir ‘encouraging revolution…bringing down the mighty from their thrones and lifting up the lowly, again from Luke’s gospel’ but, ultimately, this was the Radical Bible with its string long removed as they were singing from ‘the heart of the establishment’, Westminster Abbey, presumably oblivious to their ‘sedition’.

This is mythmaking in the sense that it is a non-Solomonic reading of the Bible (as Mette Bundvad and Jonathan Downing pointed out on Twitter) and, by linking such sentiments with Corbyn (‘the only one who even approximates to Christian teaching about wealth’), Fraser continues the historic connections between the Radical Bible and the Left of the Labour movement, arguably as explicit an example as there has been in the mainstream media. Indeed, there is an explicit distancing of this Bible from the Right of the Labour Party, particularly the Blairites (‘their fondness for Mammon’) and Peter Mandelson who, unlike Fraser’s Bible, was ‘intensely relaxed about people getting filthy rich’.

But Fraser isn’t the only one this past week who has been engaging in ideological disentanglement by invoking the Bible in distinction from establishment figures. Outside the mainstream political establishment, though a fairly regular presence inside newspaper pages, the Radical Bible has been found lurking among the anarchist group, Class War, who have, not for the first time (look at the banner—one of the most famous Class War images—on their Facebook page), appropriated the spirit of Jesus to the cause (the following images and posts are on their publicly available Facebook page; see also their webpage). Often when looking at such uses of the Bible they might be unconscious or accidental. Probably not in this case (1 October, 2016; photo by Guy Smallman): 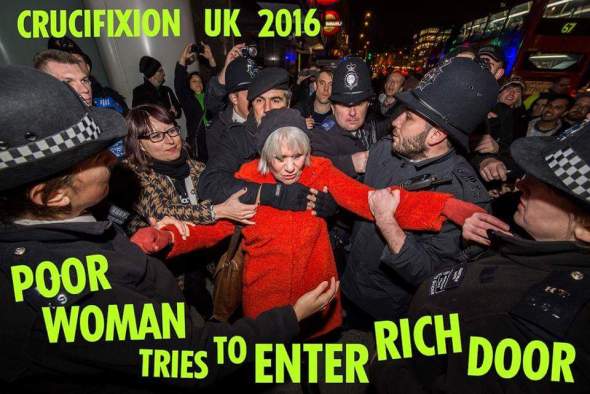 In this instance Class War were publicising an instance of a female member physically assaulted by an estate agent in front of the police and in the context of a demonstration against Boris Johnson. Gender is brought to the fore, not just in the crucifixion photograph but also in surrounding posts, including those explaining the situation. But gender is also foregrounded in surrounding posts, including one (1 October, 2016) which deliberately distances Class War feminism from liberal, establishment feminism (as we will see in the next week or so, Hilary Benn is a popular target elsewhere) and one (3 October, 2016) which is a Women’s Death Brigade demo who, keeping close to the presence of Radical Bible with some classic Class War dark humour, are ‘smiters of the high and mighty’: 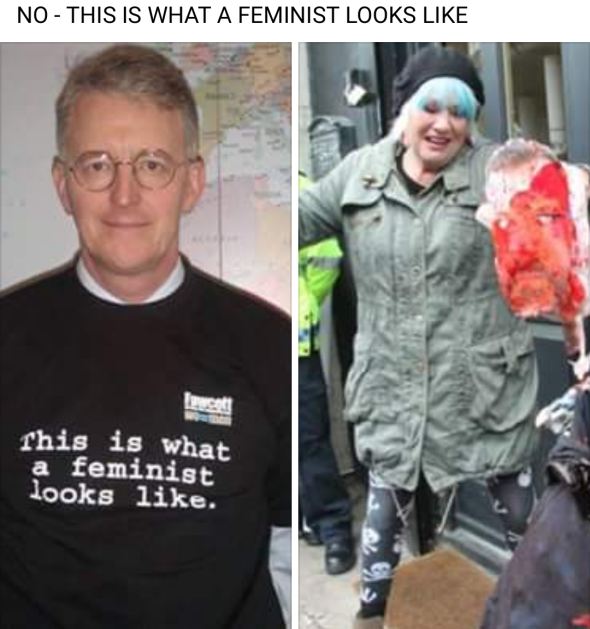 Put crudely, gender is one of the areas where ideological differences between ‘liberal’ and ‘radical’ are being played out (with the Bible) in post-2008 political discourse. But we will return to the Bible and different understandings of feminism sometime in the next week or so but, for now, back to Fraser. There are hints in Fraser’s article of other tendencies commonly found in the Radical Bible tradition (e.g. bad receivers—including Trump—of a biblical message deemed purer), including a connection with Britishness which (alongside, or interchangeable with, ‘Englishness’) has long been a key part of constructing socialist readings of the Bible in English political discourse (popularised in opposition against what was deemed ‘foreign’ Stalinism): ‘can it really be so inconceivable that Jeremy Corbyn’s political philosophy is inimical to the British people when he…is the only one who even approximates to Christian teaching about wealth. After all, Christianity is, like it or not, still the official religion of this country.’ Indeed, such connections have been made by Corbyn himself. His 2015 Labour Party conference speech was just after various attacks for a lack of patriotism by faux-outraged journalists who, apparently, get very angry about what constitutes a legitimate bow. In his speech, Corbyn made the following claim with an allusion to the Good Samaritan: ‘Fair play for all. Solidarity and not walking by on the other side of the street when people are in trouble. Respect for other people’s point of view. It is this sense of fair play, these shared majority British values that are the fundamental reason why I love this country and its people.’

All this Radical Bible is hardly going unchallenged and recently Rafael Behr, a political columnist in the Guardian and regular critic of Corbyn, Momentum, etc. has made another criticism of Corbyn and his followers in terms of their unwillingness to compromise on their views, in this case opposition to Trident: ‘To walk away from that conviction for reasons of electoral pragmatism is the kind of grubby compromise that offends their Pentecostal spirit.’ While (some) adherents of the Radical Bible tradition readily embrace the language of heretics and deviancy from the assumed orthodox church, plenty of critics in the press (and in terms of the British media, Pentecostalism is the sort of the thing that is just too peculiar) use related language to categorise unwanted and (what is assumed to be) irrational enthusiasm. This labelling picks up on historic classification of the ‘irrational’ used to marginalise challenges to liberal capitalism (on which see Alberto Toscano). And hence labels such as ‘sect’, ‘sectarian’, ‘fundamentalist’, ‘cult’ etc. have been used to describe Corbynism and other leftist groups or movements as something ‘unorthodox’. (Occasionally ‘religion’ is used as the irrational Other but this is less common, particularly among politicians who will rarely attack religion per se). And from the perspective of the mainstream political consensus at least prior to Corbyn, anti-austerity has been more at the fringes since the 2008 crash, tolerated at the leftist end of the Guardian or on the backbenches of Parliament. The challenges to this Thatcher-Blair settlement is, by this definition, ‘fundamentalist’, ‘sectarian’, or ‘cultist’ and we thus see how such ‘religious language’ is used to police the boundaries of political consent.

4 thoughts on “This Past Week in the Political Bible: Giles Fraser, Jeremy Corbyn, Class War, and Pentecostalism”