Anthony Le Donne, one of the most important advocates of social memory studies in historical Jesus and New Testament studies, likes being goosed by ‘a good Johannine parenthetical statement’. And who doesn’t? In this instance, Anthony wants to challenge one point on the use of John in historical Jesus studies which I raised in a previous blog post. However, I’m not sure this is actually a point of disagreement between us. In fact, I think I agree with his general point.

Anthony has raised the question, ‘Did Jesus baptize’? This is based on the contradictory accounts in John 3.22 and John 4.1-3. Anthony adds:

Why is the Fourth Evangelist so concerned that we might think that Jesus was baptizing? Furthermore, why doesn’t the author correct or clarify to this effect a chapter earlier when the topic is introduced? And why is it a problem that the Pharisees think that Jesus was baptizing? Finally, we have a fascinating “he learned” that they “had heard” situation. Are we to imagine that the Judean rumor mill has run amok?
But embedded in this politicized counter-memory is a memory of a specific rumor about Jesus. Could it be that some Pharisees in the late first-century believed that Jesus baptized people en masse? Given the way the storyteller presents this datum, I would tend to think so.

Yes, it would certainly seem that this is, at the very least, a view which was present at the end of the first century for reasons Anthony gives. Anthony makes a further suggestion:

And it is possible that Jesus did baptist. Indeed we might think of Jesus’ foot washing and Peter’s request to be washed entire differently in this light. Given that Jesus had a high respect for John the Baptist, this claim is worth considering. Not only is it historically possible, it had enough traction to have created a minor controversy. The Fourth Evangelist seeks to create distinction between Jesus and John and thus interjects a counter-memory. Whether or not we conclude that Jesus was a baptizer is a thesis left for another day. My point here is much more limited: the Fourth Evangelist’s not so subtle attempts to revise the tradition betray information that we would not otherwise have. Without the Fourth Gospel, the question “did Jesus baptize?” is simply uninteresting.

I would go along with that too. It certainly does raise a question that might not otherwise be raised and does show that such thinking was present when John’s Gospel was being composed. Anthony doesn’t make the case for this going back to the time of the historical Jesus, though possible suggestions are raised. But I also think this discussion shows some of the limitations of John’s Gospel. While accepting that there may be exceptions throughout John, we are left with difficulties tracing this idea back, and this is only problematized further by its absence from the Synoptic tradition. There are further problems with this specific example, if we were to push for the idea of the historical Jesus baptising. Could it have been that a tradition about Jesus baptising was invented some decades after Jesus’ death, perhaps to counter the importance of John? Perhaps, perhaps not. Were there (mis-)readings of Pauline views of baptism? Perhaps, perhaps not. And then there is this tradition (linked with Ephesus, where John may well have been written):

While Apollos was in Corinth, Paul passed through the inland regions and came to Ephesus, where he found some disciples. He said to them, ‘Did you receive the Holy Spirit when you became believers?’ They replied, ‘No, we have not even heard that there is a Holy Spirit.’ Then he said, ‘Into what then were you baptized?’ They answered, ‘Into John’s baptism.’ Paul said, ‘John baptized with the baptism of repentance, telling the people to believe in the one who was to come after him, that is, in Jesus.’ On hearing this, they were baptized in the name of the Lord Jesus. When Paul had laid his hands on them, the Holy Spirit came upon them, and they spoke in tongues and prophesied—altogether there were about twelve of them. (Acts 19.1-7)

Whatever is behind this, there were, clearly, some differing views on baptism by the end of the first century, some (most? all?) associated with John the Baptist, some also with Jesus, some not with Jesus, some with the holy spirit, and some not with the holy spirit. Unfortunately, there appears to have been some confusion (again, associated in some way with Ephesus) about baptism and, while I agree with Anthony’s main point, for my purposes of trying to understand the kinds of ideas, traditions, or memories potentially present in the 30s (or what others might understand as getting back to the historical Jesus), this Johannine tradition remains limited on the basis of the material with which we can work. Is it possible John is countering a much earlier memory or tradition? Certainly. But it is too difficult to say anything with any comparative degree of certainty in this specific case…or is it, Anthony…?

“Jew” and “Judean”: Marginalia Essays and eBook »
« Inauthenticity: The Case of John’s Gospel 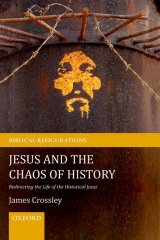